A 1-day conference at the Ecole Normal Superior of Lyon, France, will examine human-induced disturbance of sediment continuity at the river-basin scale and its potential management/restoration, from both a physical science and environmental history perspective. The conference focuses on three Mediterranean river basins, the Rhone, Ebro, and Po, drawing lessons from these relatively simple cases. Subsequent efforts will address more complex river basins involving multiple, often adversarial, sovereign states. (In English and French, with simultaneous translation.) 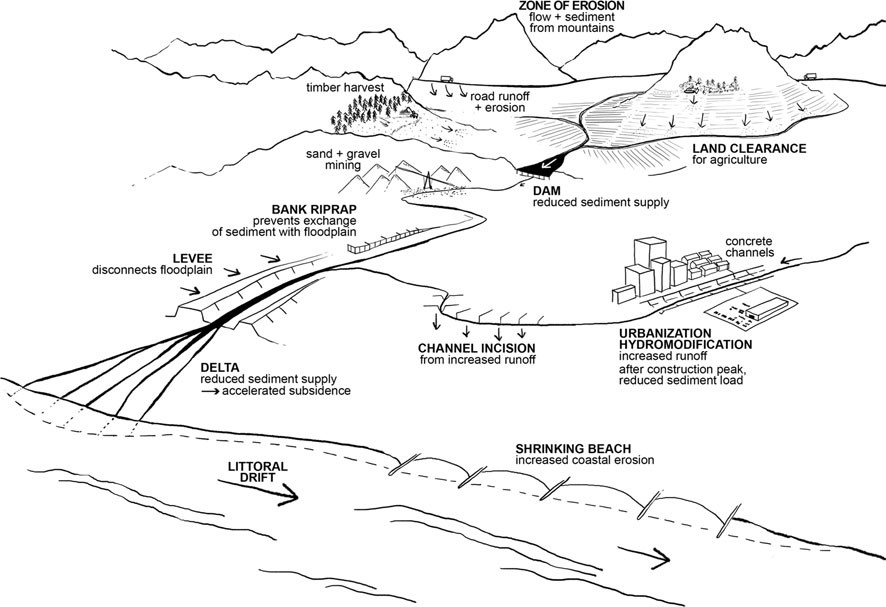 Rivers carry not only water, but sediment.  Recent interest in river basin management has mostly concerned management of water resources, with relatively little attention paid to the sediment continuity essential to maintain downstream channel functions/form and coastal features.  Despite widespread increases in land disturbance and consequent increased sediment yields from upland areas in many areas, especially in the developing world, the sediment loads of most major rivers have decreased in recent decades – as a result of extensive trapping of sediment by dams, increasingly manifest in accelerated coastal erosion and loss of delta lands.

In this conference, we examine three large rivers in southern Europe: the Rhône, Ebro, and Po. All three have experienced afforestation of their mountainous headwaters since the 19th century, which has reduced erosion rates and sediment supply to the river system. All three have been extensively modified and impounded for irrigation water supply, hydroelectric production, flood control, and navigation, mined for production of construction aggregate, and otherwise altered for human uses, and all three evince problems of erosion and subsidence of sediment-deprived deltas.  All three have basins that are all or dominantly in one state (or two), which simplifies somewhat the challenge of basin-scale management.  All three have had some basin-scale planning, the Ebro perhaps most notably with establishment of its Hydrographic Confederation in the 1920s, some years before the better-known Tennessee Valley Authority in the US.  All three are subject to EU regulations, notably the Water Framework Directive.

For each river, we will summarize sediment continuity in the context of physical and ecological processes at the basin scale, and the environmental history and institutional setting.  We seek to understand better, at the basin scale, how and why sediment continuity has changed over the past two centuries, whether and how these changes were understood and managed, and whether there has been recognition (and management) at this scale.

From our review of the literature on river-basin scale planning and management, there has been little basin-scale understanding and management of sediment issues reported, even where problems have been manifest, such as shrinking deltas.  In part, this is probably attributable to the lack of overall river basin authorities, or the fact that these authorities, where they exist, are unlikely to recognize sediment management as a pressing issue.  And many rivers drain territory in multiple states, complicating the problems, especially where there is tension between the states.

This conference will feature presentations on the three river basins from both physical geography and environmental history/social sciences perspectives, and discussants setting these basins in a larger framework.  (in English and French with simultaneous translation)

Hosted by the Collegium – Lyon Institute of Advanced Studies and the CNRS Laboratory UMR 5600 Environnement Ville Société, the conference is co-sponsored by the Agence Francaise de la Biodiversité, Eléctricité de France, and Companie Nationale du Rhône, in collaboration GRAIE and the Agence de l’Eau Rhône-Méditerranée-Corse.  This conference is coordinated with a broader research effort initiated by Professor G Mathias Kondolf (UC Berkeley) and Asst Professor Giacomo Parrinello (Sciences Po), The Social Life of the Sediment Balance: A Social and Geomorphic Approach to the Transformation of River Systems and Deltas, supported by the France-Berkeley Fund and a UC Berkeley Social Science Matrix-Sciences Po collaboration grant.