With the increasing pace of development of water resources, including a doubling of global hydroelectric generating capacity anticipated within the next two decades, rivers are under mounting human pressure, with increasing potential for water-related conflicts, especially on rivers that cross state borders. Terje Tvedt presents case studies illustrating the essential nature of water in shaping the human experience and describes emerging trends in water resources management. His presentation will include excerpts from his recent films.

The increased pressure to develop hydroelectric power comes into sharp focus in Southeast Asia, where the Mekong River is undergoing rapid dam development, and where planning is underway for hydropower dams in the Ayeyarwady River basin. Tarek Ketelsen reports on a strategic environmental assessment for hydropower development in the Mekong and current planning for dams in the Ayeyarwady River basin.

Dr. Terje Tvedt is Professor of Geography at the University of Bergen and Professor of History at the University of Oslo. He is the editor of the nine-volume series A History of water (IB Taurus, London 2004-2016), and creator of numerous television documentaries on water in societies, including the Future of Water, available on Netflix (2016). His most recent book is Water and Society, Changing Perceptions on Development and History (IB Taurus, 2016).

Tarek Ketelsen is CEO of AMPERES a renewable energy technology and consulting enterprise based in Ho Chi Minh City Vietnam. He also manages the Australian Government’s Water Partnership in Myanmar, including coordination of the Ayeyarwady State of the Basin Assessment process within the Ayeyarwady Integrated River Basin Management Project. Previously as the Technical Director of the International Centre for Environmental Management, he conducted studies of river basin development impacts and sustainable management throughout Southeast Asia, and was a lead author of the Strategic Environmental Assessment for hydropower development on the Mekong River for the Mekong River Commission released in 2010.

This seminar is presented as part of the UC Berkeley Institute of International Studies interdisciplinary faculty seminar series on Water Management: Past and Future Adaptation, with additional support from the Peder Sather Center. 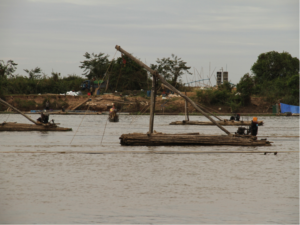